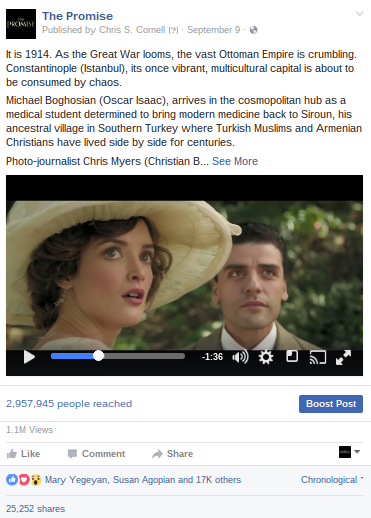 The Promise is an upcoming historical drama directed by Terry George (Hotel Rwanda) and starring Christian Bale, Oscar Isaac, and Charlotte LeBon, set in the final days of the Ottoman Empire.

The Facebook page for The Promise was created by WOW Production Services in August 2016, in preparation for the film’s screening at the Toronto International Film Festival on September 11. Facebook ads were used to quickly build up a following, and when the Official Trailer was first posted at noon on September 9, it was shared organically an average of 2,000+ times per hour for the first seven hours. That video has been viewed 1.1 million times via The Promise Facebook page, and has been shared more than 25,000 times.

The U.S. distribution rights for The Promise were recently acquired by Open Road Films, and the film is scheduled to be released wide on April 28, 2017.